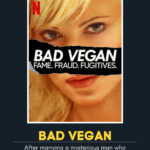 Let’s talk about Bad Vegan: Fame. Fraud. Fugitives., a docuseries on Netflix. After marrying a mysterious man who claimed he could make her dog immortal, a celebrated vegan restaurateur finds her life veering off the rails.

After marrying a mysterious man who claimed he could make her dog immortal, a celebrated vegan restaurateur finds her life veering off the rails.

Just when I think that a story can’t get any stranger, Netflix releases a new docuseries and proves me wrong. This docuseries has a little bit of everything from immortal dogs to catfishes. It’s just as ridiculous as it sounds, and I enjoyed every moment.

Have you seen Bad Vegan: Fame. Fraud. Fugitives. yet? Let me know what you think about it in the comments below. Don’t forget to visit often to find out what book you should read next, which tv show or movie you should watch next, and what podcast you should listen to next. We will also be sharing new releases, canceled shows, and more! Thank you for visiting no spoiler reviews!