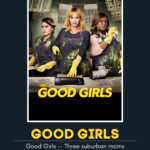 When three suburban moms get tired of trying to make ends meet, they decide it’s time to stick up for themselves by robbing the local grocery store. But when the manager catches a glimpse of one of them and the loot is far more than they expected, it doesn’t take long for the three best friends to realize the perfect getaway will be harder than they think. From Executive Producer Jenna Bans (“Grey’s Anatomy,” “Scandal,” “The Family”) comes this comedy-infused drama that mixes a little “Thelma & Louise” with a bit of “Breaking Bad.”

I went into watching this series expecting something very different. I was immediately invested in everything about it — the storyline, the families, and even the “bad guys.” This is one of the series I binge as soon as the new episodes are released on Netflix. Sadly, Good Girls will not be returning for Season 5, but don’t let that stop you from watching the first four seasons! You won’t be disappointed.

I give Good Girls on Netflix 5 out of 5 stars.

Have you seen Good Girls yet? Let me know what you think about it in the comments below. Don’t forget to visit often to find out what book you should read next, which tv show or movie you should watch next, and what podcast you should listen to next. We will also be sharing new releases, canceled shows, and more! Thank you for visiting no spoiler reviews!