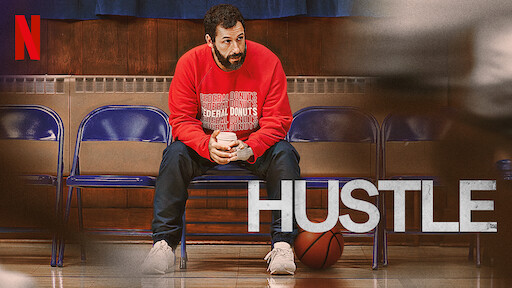 Let’s talk about Hustle, a movie on Netflix. When a down-on-his-luck basketball scout finds a potential superstar in Spain, he tries to prove they both have what it takes to make it in the NBA.

After being fired, pro basketball scout, Stanley Sugerman, is excited, for the first time in a very long while, when he serendipitously discovers Spanish amateur baller Bo Cruz playing in a park outside Madrid. Fueled with newfound purpose, Stanley makes it his mission to groom Bo for the NBA as he believes they both can make it.

I’ve been a huge Adam Sandler fan since the ’90s. I’ve been sadly disappointed by so many of his films in recent years, so I put off watching Hustle much longer than I normally would have. I gave in when I saw it had made it to the top 5 on Netflix. As soon as the final credits rolled, I yelled, “Adam Sandler is back!” Wow. This movie is labeled a comedy, but it’s so much more. The movie had me feeling so many emotions – anger, happiness, sadness, and hope. If you’re looking for a feel-good movie, this is it! I can’t wait to see what Adam Sandler comes up with next.

I give Hustle on Netflix 5 out of 5 stars.

Have you seen Hustle yet? Let me know what you think about it in the comments below. Don’t forget to visit often to find out what book you should read next, which tv show or movie you should watch next, and what podcast you should listen to next. We will also be sharing new releases, canceled shows, and more! Thank you for visiting no spoiler reviews!