We Need to Talk About Cosby 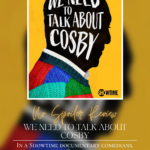 Let’s talk about We Need to Talk About Cosby, a docuseries on Showtime. Writer/director W. Kamau Bell explores Bill Cosby’s descent from “America’s Dad” to an alleged sexual predator. Comedians, journalists, and Cosby survivors have a candid, first-of-its-kind conversation about the man, his career, and his crimes.

A revealing four-part documentary series from writer/director W. Kamau Bell offering a deeply personal exploration of Bill Cosby’s descent from “America’s Dad” to an alleged sexual predator. Exploring the complex story of Cosby’s life and work, Bell invites comedians, educators, journalists, and Cosby survivors to have a refreshingly candid, first-of-its-kind conversation about the man, his career, and his crimes. Bell takes an unfiltered look at his legacy and the unexpected ramifications for an industry that enabled him.

Like most people my age, I grew up watching Bill Cosby. We faithfully watched The Cosby Show every week. I watched Fat Albert. I watched Picture Pages (I still know the words to the theme song). I remember the pudding pop commercials. He was America’s Dad. Until he wasn’t. And even though 60+ women have come forward with allegations, AND he admitted he was drugging women, AND he was convicted in a court of law, it’s still a subject that divides people. This documentary was perfectly made. It highlights Bill Cosby and how he became famous. It highlights the reasons why we all thought we loved him. But it also gives the survivors and the victims the platform to speak their truths. We all should have been talking about it a long time ago. Thank you, Kamau Bell.

I give We Need to Talk About Cosby on Showtime 5 out of 5 stars.

Have you seen We Need to Talk About Cosby yet? Let me know what you think about it in the comments below. Don’t forget to visit often to find out what book you should read next, which tv show or movie you should watch next, and what podcast you should listen to next. We will also be sharing new releases, canceled shows, and more! Thank you for visiting no spoiler reviews!